Colombian former President Álvaro Uribe on Friday urged that police and military have the right to use arms in the context of demonstrations against the tax reform being promoted by the government of Ivan Duque, his political godson. The following reactions included Human Rights groups and political figures pressing Twitter to suspend Uribe’s account, where he posted the message.

“Let us support the right of soldiers and police to use their weapons to defend their integrity and to defend people and property from the criminal action of vandalism terrorism,” the former president wrote on Friday morning, two days after the national strike called by workers' centres and student organisations.

His message on Twitter was deleted hours later for failing to comply with his policies “regarding the glorification of violence” and has been interpreted by the opposition as an incitement to violence.

“In a state governed by the rule of law, a vandal and a criminal also have rights, including due process and the proportional use of force. They are caught and prosecuted, not shot,” reacted Luis Ernesto Gómez, the government secretary of left-wing Claudia López's mayor's office in the capital Bogotá.

Wednesday's mostly peaceful day ended with mass marches, blockades, sporadic clashes with police in major cities and some unrest in Bogotá, Medellín and Cali, where protests reportedly ended in looting and vandalism. The unrest has continued into Friday in some parts of the country.

Excessive use of force and police abuses have been firmly entrenched in the public debate in Colombia since the wave of demonstrations against the Duque government at the end of 2019, before the start of the pandemic that triggered a five-month lockdown to prevent covid-19 infections. 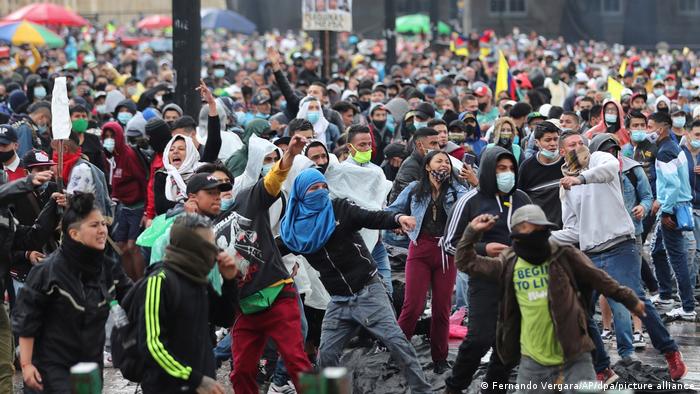 The unrest has continued into Friday in some parts of the country. (Fernando Vergara via AP)

José Miguel Vivanco, Americas director of Human Rights Watch, called on “someone to explain to Mr Uribe” that “according to international standards, police can only use firearms as a last resort to prevent a certain threat to life or physical integrity. Soldiers are trained for war, not for public security”.

President Duque's unpopular tax reform, entitled the Sustainable Solidarity Law, has less and less political support. The bill, which the government has said it is willing to reformulate, has sparked criticism even from Uribe, who remains the undisputed leader of the ruling Democratic Centre party, despite facing problems with justice.

The controversial law seeks to broaden the tax collection base, prevent Colombia's debt from losing more points in international risk ratings, institutionalise basic income and create a fund for environmental conservation. Colombian Finance Minister Alberto Carrasquilla clarified that “73% of the collection will come from individuals and the rest from companies”.

In addition, the law proposes to impose Value Added Tax (VAT), which in Colombia is 19%, on basic consumer products such as utilities (water, electricity and gas), funeral services, electronic items such as computers, and other services that have been exempt until now.