By Dana M Bergstrom and Shavawn Donoghue – We tend to think Antarctica is isolated and far away – biologically speaking, this is true. But the continent is busier than you probably imagine, with many national programs and tourist operators crisscrossing the globe to get there.

And each vessel, each cargo item, and each person could be harbouring non-native species, hitchhiking their way south. This threat to Antarctica’s fragile ecosystem is what our new evaluation, grapples with.

We mapped the last five years of planes and ships visiting the continent, illuminating for the first time the extent of travel across the hemispheres and the potential source locations for non-native species, as the map below shows. We found that, luckily, while some have breached Antarctica, they generally have yet to get a stranglehold, leaving the continent still relatively pristine. 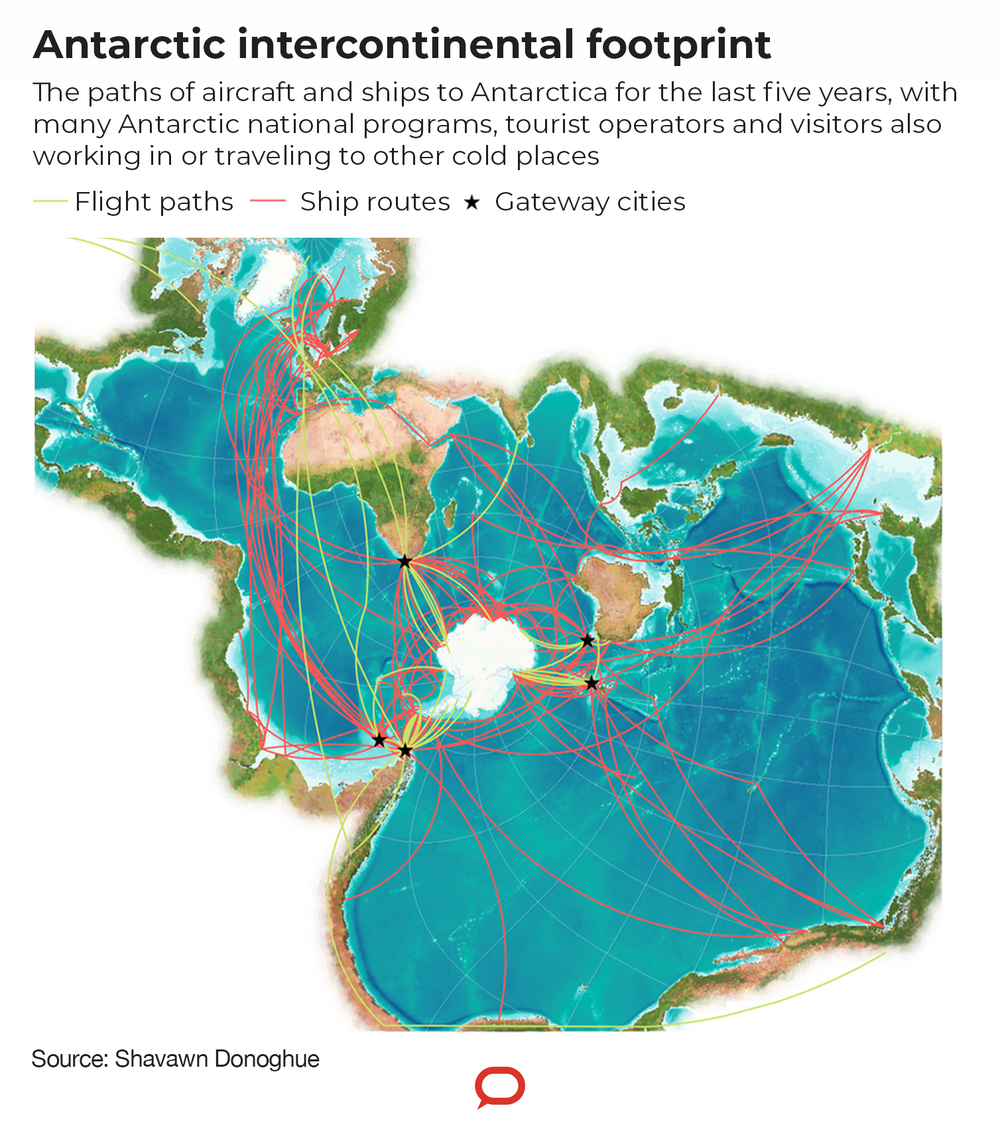 But Antarctica is getting busier, with new research stations, rebuilding and more tourism activities planned. Our challenge is to keep it pristine under this growing human activity and climate change threat.

Biodiversity-wise, much of the planet is mixed up. The scientific term is homogenization, where species, such as weeds, pests and diseases, from one place are transported elsewhere and established. This means they begin to reproduce and influence the ecosystem, often to the detriment of the locals.

Most life in Antarctica is jammed onto tiny coastal ice-free fringes, and this is where most research stations, ships and people are.

This includes unique animals (think Adélie penguins, Weddell seals and snow petrels), mosses and lichens that harbour tiny invertebrates (such as mites, water-bears and springtails), and an array of microbes such as cyanobacteria. The adjacent coast and ocean team with life, too.

The more we learn about them, the more outstanding life at the end of the planetary spectrum becomes. Just this week, new scientific discoveries identified that some Antarctic bacteria live on air, and make their water using hydrogen as fuel.

When the Southern Ocean has formed some 30 million years ago, natural barriers were created with the rest of the world. This includes the Antarctic Circumpolar Current, the strongest ocean current on the planet, and its associated strong westerly surface winds, icy air and ocean temperatures.

This means life in Antarctica evolved in isolation, with flora and fauna that commonly exist nowhere else and can cope with frigid conditions. But the simplicity of Antarctica’s food webs can often mean there are gaps in the ecosystem that other species from around the world can fill.

In May 2014, for example, routine biosecurity surveillance detected non-native springtails (tiny insect-like invertebrates) in a hydroponic facility at an Australian Antarctic station.

This station, an ice-free oasis, previously lacked these interlopers, and they had the potential to alter the local fragile ecosystem permanently. Thankfully, a rapid and effective response successfully eradicated them.

Pressures from climate change are exacerbating the challenges of human activity on Antarctica, as climate change is bringing milder conditions to these wildlife-rich areas, both on land and sea.

As glaciers melt, new areas are exposed, which allows non-Antarctic species greater opportunity to establish and possibly outcompete locals for resources, such as nutrients and precious, ice-free space.

So far, we’ve been lucky

Our past research focused on non-native propagules – things that propagate like microbes, viruses, seeds, spores, insects and pregnant rats – and how they entrain themselves into Antarctica.

But few non-native species have been established in Antarctica, despite their best efforts.

To date, only 11 non-native invertebrate species – including springtails, mites, a midge and an earthworm – have been established across a range of locations in the warmer parts of Antarctica, including Signy Island and the Antarctic Peninsula. In the marine realm, some non-native species have been seen but it’s thought none have survived and been established.

Microbes are another matter. Each visitor to Antarctica carries millions of microbial passengers, and many of these microbes are left behind. Around most research stations, human gut microbes from sewage have mingled with native microbes, including exchanging antibiotic resistance genes.

Last year, for example, a rare harmful bacteria, pathogenic to both humans and birds, was detected in guano (poo) from both Adélie and gentoo penguin colonies at sites with high rates of human visitors. COVID-19 also made its way to Antarctica last December.

What do we do about it?

Three factors have helped maintain Antarctica’s near-pristine status: the physical isolation, cold conditions and cooperation between nations through the Antarctic Treaty. The Treaty is underpinned by the Environmental Protocol, which aims to prevent and respond to threats and pressures to the continent.

But time is of the essence. We must better prepare for the inevitable arrival of more non-native species to prevent them from establishing, as we continue to break the barriers protecting Antarctica. One approach is to tailor the newly developed 3As approach to environmental management: Awareness of values, Anticipation of the pressures, Action to stem the pressures.

This means ramping up monitoring, taking note of predictions of what non-native species could sneak through biosecurity and establish under new conditions, and putting in place pre-determined response plans to act quickly when they do.