After a long election campaign, Uruguayans live the last days before the second round of the presidential elections, which will take place on Sunday, November 24. The latest polls before the ballotage positions the nationalist Luis Lacalle Pou as the next president of the country, breaking the hegemony of the left that the Frente Amplio (Broad Front) imposed in the last 15 years.

According to the study of the consulting firm Factum presented on Tuesday, 51% of the electorate would vote for Lacalle and 43% would do so for the former mayor of Montevideo, Daniel Martínez.

Meanwhile, 6% said they will vote blank. This measurement, that displays the greatest distance between the candidates among other studies, does not show the percentage of undecided voters because it projects how these people can end up behaving next Sunday (in Uruguay, the election is mandatory).

The multiparty coalition of opposition parties that the National Party is leading to take advantage over the Frente Amplio has achieved the accession of the majority of the voters of its traditional rival, the Colorado Party (which collected 12.34% of the electorate in the first round of October ), of the recently founded Cabildo Abierto (with 11.04%) and other parties with less parliamentary representation.

The Factum survey also shows a slight inclination of the Montevideo electorate to Martínez, while in the interior of the country the preference for Lacalle rises to 58%. 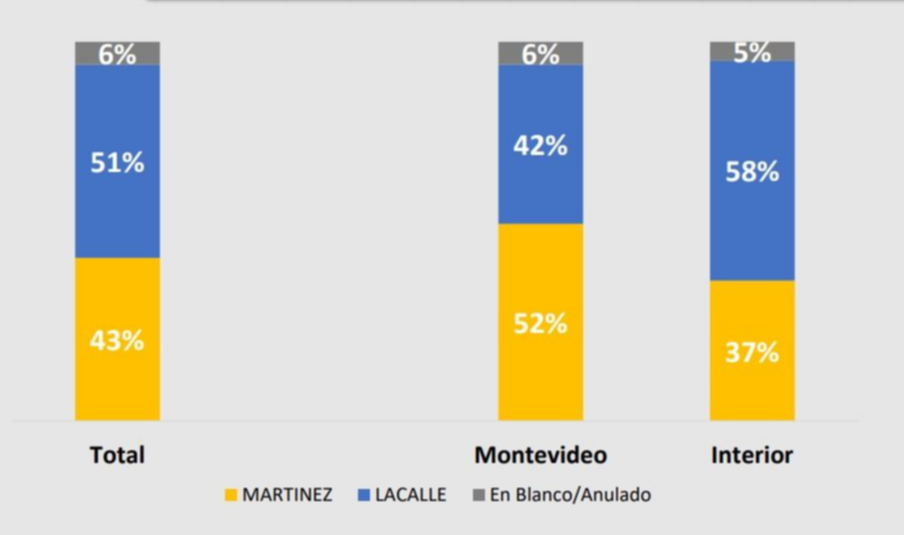 On the other hand, on Monday the consultant company Cifra presented its penultimate survey and indicated that the opposition candidate will collect a support of 47% of the electorate and the ruling party candidate of 42%. This study did not include projection of undecided electorate.

The same numbers were presented by another consultant, Opción, on Monday of last week. In addition, the Equipos survey presented on November 12, registered that 48% would choose for Lacalle and 42% for Martinez. That same day, the Radar pollster released a new survey that gave Lacalle Pou an advantage of almost seven percentage points.