A consortium of Chinese companies describing themselves as mile 201 operators has expressed an interest in acquiring an Argentine shipyard in Comodoro Rivadavia, Argentina.

The term mile 201 is a reference to fishing operations in international waters, or beyond the 200 mile maritime zone, and which have come under fire recently for their lack of scrutiny and control.

According to a letter leaked on social media on Saturday, four Chinese firms - Zhoushan Huaxi Ocean, Hongdong Fisheries, Ronggheng Rongyuan and Shanghai Kunting Import – approached local government authorities in Comodoro Ribadavia in November to express an interest in using and possibly acquiring the shipyard. The facility, they argue, would be of great use to the companies in question and the wider membership of the Chinese fishing chamber in Argentina. In addition, the companies request to use the port as a supply base for their operations in the South Atlantic.

The potential operation has been met with criticism in Argentina, where industry representatives have urged the government not to provide mile 201 operators with any support that results in a reduction of their operating costs.

According to estimates from the Argentine institute for fishery research and development (INIDEP), as many as 338 squid jiggers had operated in the mile 201 area in the first nine weeks of 2021, compared to 70 jiggers inside the Argentine EEZ for the same period.

The letter (in Spanish): 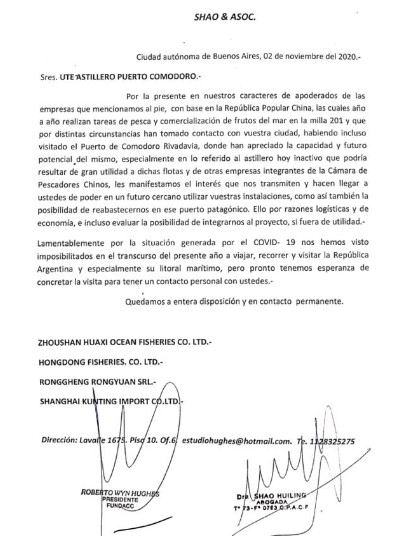