Uruguay has managed to keep inflation at 6.8%, which is within the government's target range for the first time in 36 months, it was announced Wednesday.

With consumer price increases beyond the government's control, staying within budgetary projections has been the exception rather than the rule and records below 7% occurred only in 14 of the last 120 months.

However, these new achievements had been anticipated by analysts who had foreseen it would happen once the effect of the tariff adjustments could impact retail prices.

According to the National Institute of Statistics (INE), consumer prices rose 0.5% in April, which led to year-on-year inflation of 6.8%, Uruguay's lowest since the same month of 2018, thus breaking a string of 36 consecutive months above the official goal, between 3% and 7%. 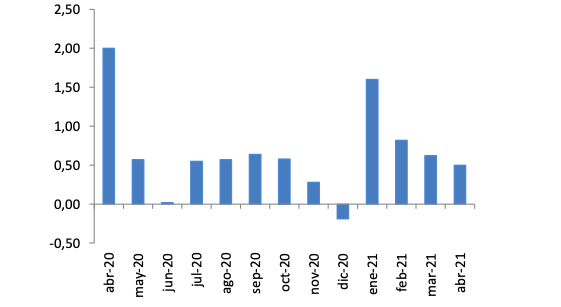 Inflation began slowing down recently after recording an interannual maximum of 11.1% in May last year, boosted by a rise in the prices of garden products due to a supply shortage caused by adverse weather.

Since then, and with some ups and downs, inflation has tended to moderate in a scenario of relative exchange rate stability, moderate raw food prices, a weak demand, and successful work effort from the Uruguayan Central Bank (BCU) in bolstering consumer confidence.

Analysts consulted monthly by the BCU had projected in April a yearly 7.1% inflation and a slowdown in early 2022 thus making it 6.8% and in the longer term experts foresee it at 6% by the end of 2023.

Food prices have been slowing down recently, compared to previous months when they accounted for the bulk of the country's inflation. In February of 2021, a rise of 10.2% had been registered compared to the same month of the previous year, whereas by April was 4.6% year on year, one of the items to suffer the smaller increases behind communications (2.5%).

Fruits went down 5.6% last month, thus slowing down prices of unprocessed foods as a whole, which had recorded 6.5% year on year by March and fell to 1.1% in April.