Education authorities in the Argentine Province of Santa Fe were placed under investigation Tuesday after it was found that a booklet distributed among sixth-grade schoolchildren featured a map where the Malvinas (Falkland) Islands were depicted as British territory despite the country's claim otherwise.

After local teachers spotted the error, Education Ministry authorities were alerted and the instructional material was immediately withdrawn from circulation as well as from the virtual campus of the province.

The Santa Fe Ministry of Education distributed to sixth-grade students from different schools in the province an educational material with a map in which the Malvinas / Falkland and other South Atlantic islands were marked as territories belonging to the United Kingdom, which Argentina disputes. 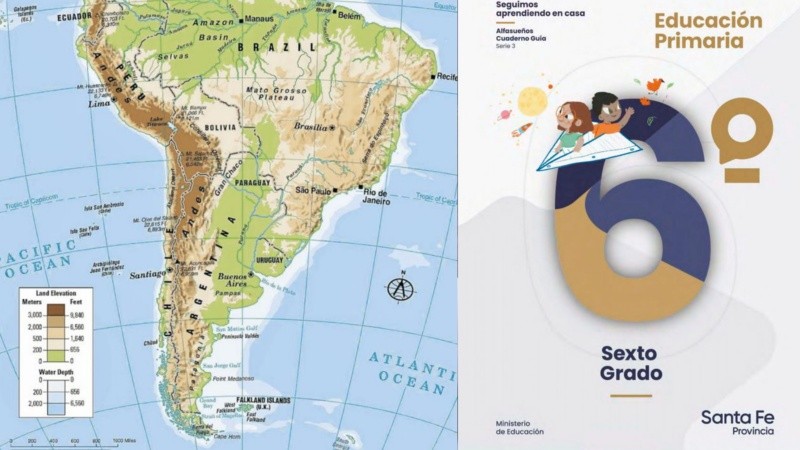 The map says that the islands belong to the U.K.

Nevertheless, Santa Fe authorities have maintained the alleged “error” would only be in the digital version of the booklet and not in the printed version.

The controversial labelling was detected by a group of union delegates from Rosario and one of the teachers decided to file a complaint before the province's Ministry so that action could be taken.

Within a few hours, the material was no longer available for download on the Ministry's website, but it was physically available in some institutions.

The material under questioning had been devised under a “We continue learning at home” for sixth-grade pupils and features a foreword signed by Santa Fe's Education Minister Adriana Cantero and Education Secretary Víctor Debloc.

“We meet again. This time, to travel the roads of our Latin America,” begins the text above the map labelled in English “East and West Falkland.”

The complaint requested that the controversial material “be publicly destroyed with an act of reparation to the Argentine people and especially to our heroes and war veterans who offered their lives for the cause of our national sovereignty.”

It also calls for an investigation into “both the magnitude of the damage caused and those responsible for this very serious deed.”