The Falklands Maritime Heritage Trust is pleased to announce that the wreck of SMS Scharnhorst has been located off the Falkland Islands. The Scharnhorst, an armoured battle-cruiser and the flagship of Admiral Maximilian Graf von Spee’s East Asia Squadron, was sunk on 8 December 1914 during the Battle of the Falkland Islands, a crucial naval battle in the early days of the First World War.

This discovery is a major breakthrough in the quest to locate all of the ships that comprised the German squadron lost during the battle. The search began on the centenary of the Battle in December 2014 but was initially unsuccessful. Five years later, the mission was resumed using state of the art subsea search equipment. Working from the subsea search vessel, Seabed Constructor, the search operation involved the deployment of four Autonomous Underwater Vehicles (AUVs), exploring a search box of approximately 4,500km2 of the seabed. Working methodically through the designated search area, and using equipment including side-scan sonar and a multi-beam echo-sounder, Scharnhorst was discovered on the third day of the search 98 nautical miles south-east of Port Stanley at a depth of 1610 meters. 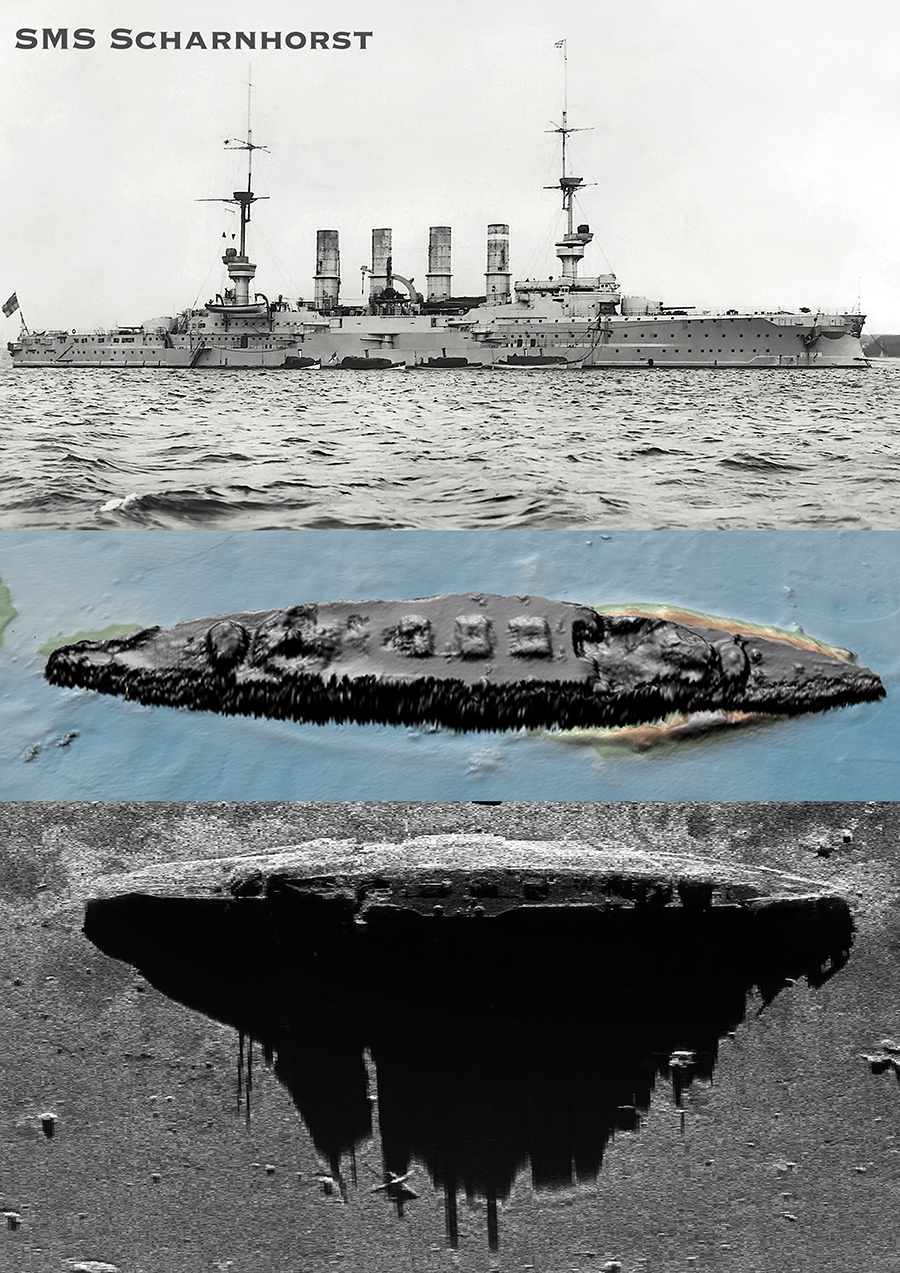 The Battle of the Falkland Islands followed the Battle of Coronel, fought off the coast of Chile in November 1914, where Graf von Spee’s fleet overpowered the Royal Navy and in which 1600 British sailors perished. A month later a British squadron under the command of Vice-Admiral Doveton Sturdee, pursued, engaged and defeated Graf von Spee’s squadron, comprising the Scharnhorst, Gneisenau, Nürnberg and Leipzig. The action was particularly important because as a consequence of the battle, the German East Asia Squadron, Germany's only permanent overseas naval formation, effectively ceased to exist, bringing an end to commerce raiding by German warships.

The Scharnhorst, built in Hamburg in 1905, was the first to be sunk, having sustained substantial damage inflicted by HMS Invincible and HMS Inflexible. Tragically 2,200 German sailors died, including Graf von Spee himself and his two sons - Heinrich aboard the Gneisenau, and Otto aboard the Nürnberg. 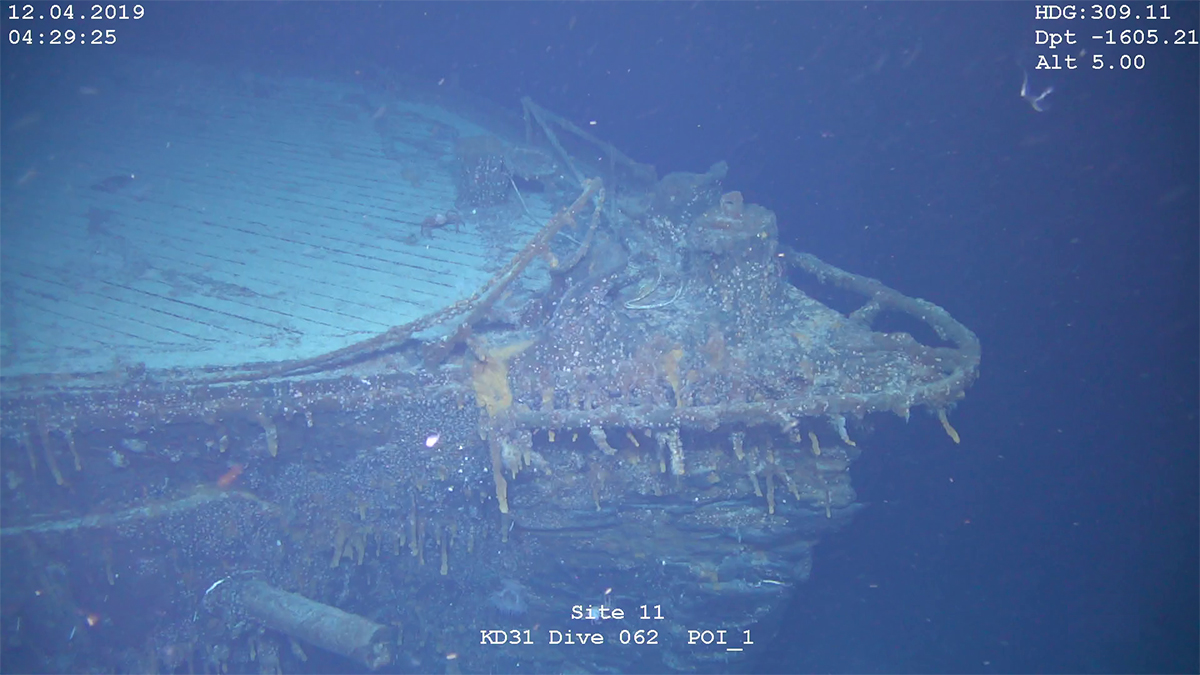 The Falkland Maritime Heritage Trust is now seeking to have the site formally protected in law. The wreck was not touched or in any way disturbed during the operation. The team on board Seabed Constructor conducted an act of remembrance at the site, commemorating all who died during the Battle.

The film production company TVT has been recording the search from its inception five years ago. Already, experts who have viewed unedited clips confirm that they reveal new information about this important episode in British and German naval history and in the history of the Falkland Islands. At the time of this announcement, first showings of the completed film are being held in the UK and the Falkland Islands.

Donald Lamont, Chairman of The Falklands Maritime Heritage Trust, said: “It is less than a month since Remembrance Day, when we commemorated the millions who died in the First World War and subsequent conflicts. One episode in that conflict was the Battle of the Falklands in 1914. The search we organised had as its aim the locating of all ships of the German squadron, so that we may learn more about the Battle and commemorate all who perished in it. The site of the wrecks can now be protected. 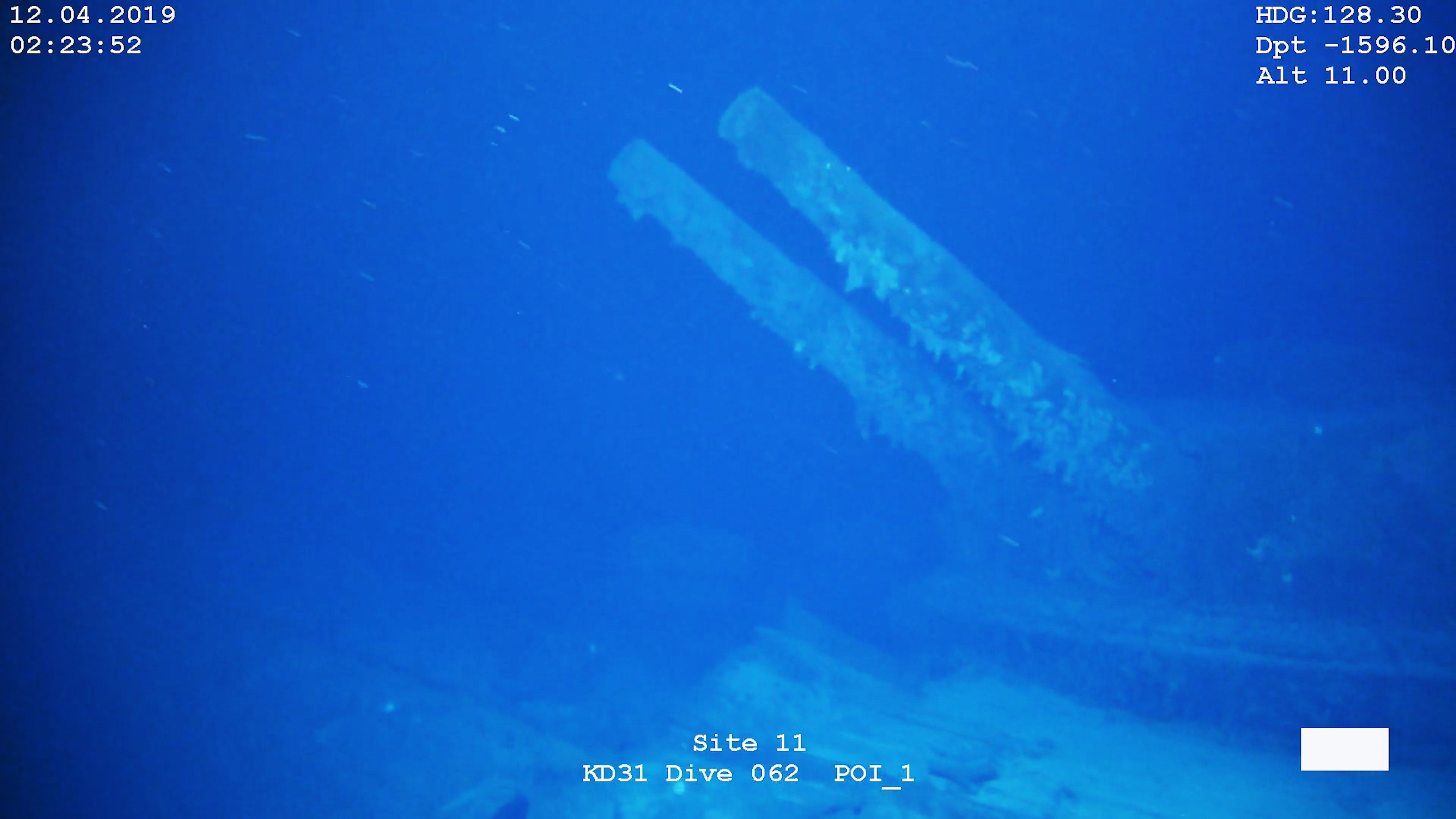 Turrets of the ship.

Mensun Bound, the leader of the search, said: “It is with mixed emotions that we announce the discovery of SMS Scharnhorst, the armoured German battle-cruiser that was sunk during the Battle of the Falkland Islands in 1914. After a search that began five years ago, on the centenary of the battle, we are very proud to be able to shed further light on what was a defining point in WWI, and therefore a landmark moment in modern history. 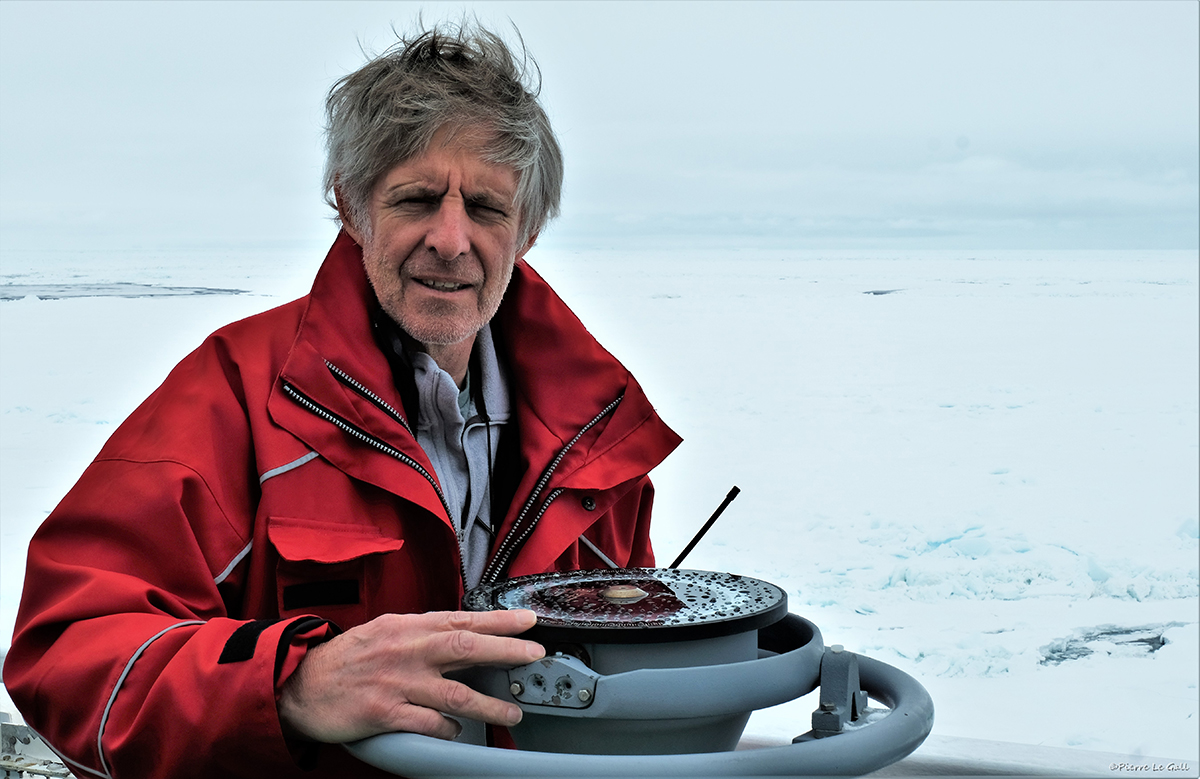 “The moment of discovery was extraordinary. We are often chasing shadows on the seabed, but when the Scharnhorst first appeared in the data flow, there was no doubt that this was one of the German fleet. You could even see the impact crater. We sent down an ROV to explore and almost straight away we were into a debris field that said 'battle'. Suddenly she just came out of the gloom with great guns poking in every direction.

”As a Falkland Islander and a marine archaeologist, a discovery of this significance is an unforgettable, poignant moment in my life. Our work on this important project is not done. We will continue to assess the images that we have captured and, in time continue to search for the remainder of the fleet, in order to provide a greater understanding of the events of that day, and to ensure the protection of the site.”

Wilhelm Graf von Spee, head of the Graf von Spee family, said: “Speaking as one of the many families affected by the heavy casualties suffered on 8 December 1914 at the Battle of the Falkland Islands, the discovery of SMS Scharnhorst is bittersweet. We take comfort from the knowledge that the final resting place of so many has been found, and can now be preserved, whilst also being reminded of the huge waste of life. As a family, we lost a father and his two sons on one day. Like the thousands of other families who suffered an unimaginable loss during the First World War, we remember them and must ensure that their sacrifice was not in vain.” 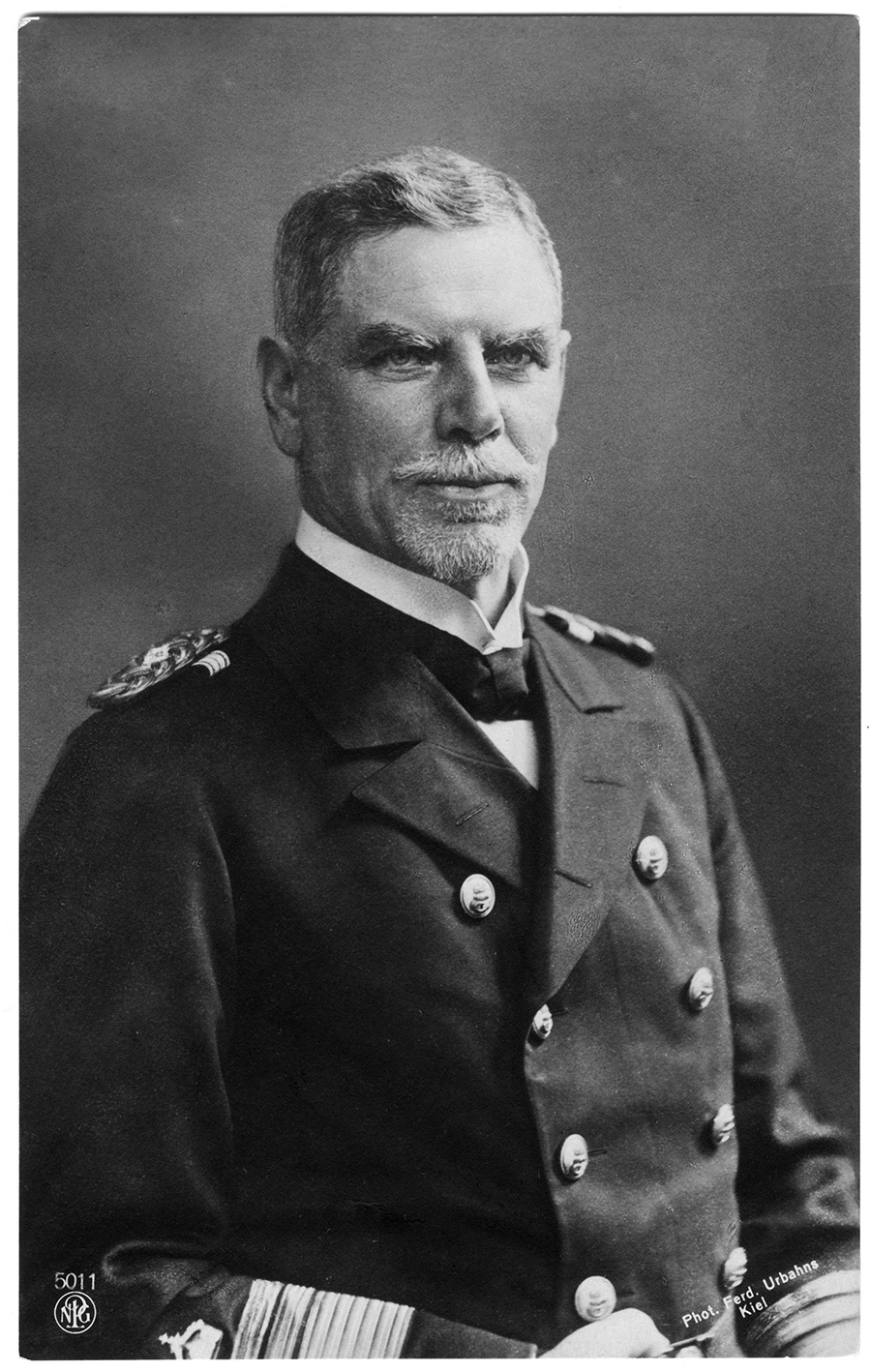 ‘Finding the site of the battle was hugely significant for the Falklands and, I venture, for anybody in the world who is interested in naval history. Before the Invasion of 1982, this was the biggest and most dramatic event in our history. Think about it – the two most powerful navies in the world, that of Britain and Germany, and they actually fought a fight-to-the-finish in our back yard. And it wasn’t just any action, it was the most decisive naval action of the war, the most destructive war the world had ever known. And yet, until today, we did not know exactly where it happened. To us at the museum it was just sort of ‘Out there’ and we would wave vaguely in the direction of the light house. But now we know where Admiral von Spee’s flagship went down, and where all those young men died, to within an inch. As soon as we find the other ships we will have to reassess the whole battle, strip away the myth, and, based on factual evidence and new archive research, think about how to retell the story – from both the British and German points of view. Explain to everybody what really happened on that terrible day in December 1914.’

Colin Roberts, Chairman of the Friends of the Falklands Museum and Archives.

‘I was Governor of the Falklands in 2014 and officiated over the 100th Anniversary Commemorations of the Battle. The descendants of the two fighting admirals came down to the Islands to be part of the occasion. They had never met before. The Islanders had built a new monument which told the story of the battle in a balanced way. As the veil came down, and before the effigies of their noble forebears, the von Spees and the Sturdees shook hands and embraced. There wasn’t a dry eye in the crowd.’